Alix London has a promising career as an art consultant, a sumptuous condo in Seattles toniest neighborhood, a gorgeous figure, and a presence that exudes Ivy League breeding and old money. She has it allor does she? Only Alix knows that the image she presents to the world is a carefully constructed mirage that veils an embarrassing truth. A brilliant, once-promising art student, the daughter of a prominent New York art conservator, her world was left in ruins when her father went to prison for art forgery. Now a Harvard dropout with an emptied bank account, she is languishing in a career that has produced little more than a lucky house-sitting gig. But all of that changes when Alix meets Christine Lemay, a novice art collector with money to burn and a hot tip on a recently discovered painting by American master Georgia OKeeffe. Chris hires Alix to perform the authentication, an assignment that finally could launch Alix into the big leagues. But soon after her arrival in Santa Fe, she finds herself tangled up in a web of forgery, deceitand murder. Anxious to avoid becoming the next victim, she teams up with FBI Special Agent Ted Ellesworthand gets a little unlikely help from her roguish fatherto uncover the truth behind the painting and those who would kill to have it. Sharp, witty, and devilishly fun, A Dangerous Talent offers an insiders look into the surprisingly treacherous contemporary art world.

Q&A with Charlotte and Aaron Elkins, authors of A Dangerous Talent 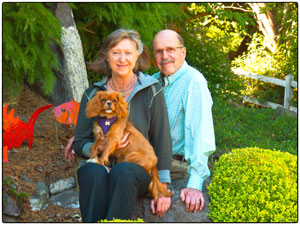 Question: A Dangerous Talent is a fast-paced mystery set in the high end Art world. Alix London is the daughter of an infamous art forger who is called upon to help verify the authenticity of nothing less than a Georgia O'Keeffe, and things go south from there. Can you tell us about the inspiration for this story? Was there a reason that you chose Georgia O'Keefe specifically?

Charlotte: In casting around for a background for a character, I remembered a fundraiser I'd attended when we were living back East. The celebrity guest was high up in the New York art scene, and the society scene as well. Not long afterwards, this glamorous person was convicted in a price-fixing scandal that destroyed her career and her reputation, and barely missed earning her jail time. Since there have been similar profile cases, and I became intrigued with the idea of developing a character, not based one of these high-society felons, but about the daughter of one, whose life had been turned down upside down by the scandal. And Alix London was born.

Question: There is a lot of great and in-depth art information in A Dangerous Talent. Can you tell us about some of the research you did?

Charlotte and Aaron: We never write about a place we haven't been to and researched. We based ourselves in Santa Fe (wonderful restaurants!) where there is a new Georgia O'Keeffe museum and also a research center dedicated to her. We toured the museum, of course, and applied for and were given permission to do some work in the research center. We'd also made an appointment to tour her studio in the tiny village of Abiquiu, 50 miles north of Santa Fe, in glorious red-rock country.

In Taos, we spent a night in the house of O'Keeffe's friend, art patron and local doyenne Mabel Dodge Luhan. Now a conference center, this was the house in which O'Keeffe spent her first summer in New Mexico, so there are many memories of her. There, you can brush your teeth or take a morning bath in the only bathroom in the world with windows personally painted by DH Lawrence, another friend of Mabel's who spent a lot of time in the house.

Question: A Dangerous Talent isn't all art authentication; there are a few explosions, white-knuckle car chase scenes, a Lamborghini, and even a bit of romance, but at its heart it's a true mystery with a great heroine. Will Alix London fans see her again? Can you tell us a little more about what in store for her next?

Charlotte and Aaron: Not only will Alix's fans see her again, but they'll see many of the characters they meet in A Dangerous Talent. Her roguish forger-father, now gone straight (or has he?), along with his band of ex-con art forgery experts, her new, rich, ex-techie friend Chris with her snazzy wine bar, and, of course, undercover art-squad FBI agent Ted Ellesworth all will be showing up again in the next Alix London mystery, when Alix gets her first consulting assignment from the squad.