The one and only Fannie Flagg, beloved author of Fried Green Tomatoes at the Whistle Stop Cafe, Cant Wait to Get to Heaven, and I Still Dream About You, is at her hilarious and superb best in this new comic mystery novel about two women who are forced to reimagine who they are.

Mrs. Sookie Poole of Point Clear, Alabama, has just married off the last of her daughters and is looking forward to relaxing and perhaps traveling with her husband, Earle. The only thing left to contend with is her mother, the formidable Lenore Simmons Krackenberry. Lenore may be a lot of fun for other people, but is, for the most part, an overbearing presence for her daughter. Then one day, quite by accident, Sookie discovers a secret about her mothers past that knocks her for a loop and suddenly calls into question everything she ever thought she knew about herself, her family, and her future.

Sookie begins a search for answers that takes her to California, the Midwest, and back in time, to the 1940s, when an irrepressible woman named Fritzi takes on the job of running her familys filling station. Soon truck drivers are changing their routes to fill up at the All-Girl Filling Station. Then, Fritzi sees an opportunity for an even more groundbreaking adventure. As Sookie learns about the adventures of the girls at the All-Girl Filling Station, she finds herself with new inspiration for her own life.

Fabulous, fun-filled, spanning decades and generations, and centered on a little-known aspect of Americas twentieth-century story, The All-Girl Filling Stations Last Reunion is another irresistible novel by the remarkable Fannie Flagg.

If all the self-help books that promote ways to find yourself were stacked in an enormous pile . . . none would approach the sweet wisdom with which Flagg infuses The All-Girl Filling Stations Last Reunion.Richmond Times-Dispatch

Its Flaggs pleasure to hit her characters with several happy endings, but the real happiness is that shes given us another lovableand quirkynovel.The Washington Post

Flagg is at her South-skewering best. . . . A chuckle-while-reading book.The Mobile Press-Register

The kind of story that keeps readers turning pages in a fever . . . There are plot twists, adventure, heartbreak, and familial love in spades.Publishers Weekly

Fannie flies high, and her fans will enjoy the ride. . . . A charming story written with wit and empathy . . . just the right blend of history and fiction.Kirkus Reviews

Fannie Flagg is a fantastic storyteller. She surprises the reader in every chapter with unexpected twists and turns. The only problem I had with this fascinating story is that it ended too soon. I cant wait for her next book.Carol Burnett

A Conversation with Fannie Flagg and Pat Conroy 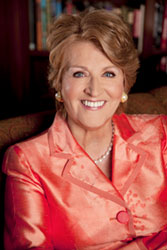 Teresa Weaver of Atlanta Magazine caught up with bestselling authors Fannie Flagg and Pat Conroy to talk about their newest novels.

Teresa Weaver: These two books are very different in so many ways, but at the heart of both, it really is all about family. Fannie, you managed to tell the whole history of the Women Air Force Service Pilots (WASPs) through one extraordinary family. What kind of research did you do for this book?

Fannie Flagg: I read almost every book that was written about them and talked to a lot of them.

TW: What drew you to this subject?

FF: There's a restaurant in Birmingham called the Whistle Stop Caf, the caf that I wrote Fried Green Tomatoes about. I happened to call the caf one day, because I'm friends with the owner, and she said, Oh! Weve got a group of gals here having lunch that used to fly military planes. They were WASPs. I said, Thats fabulous. Let me buy them lunch. They started writing me letters and sending me books about them. I always wanted to write about them, but I couldn't figure out how. I had to create another story going on one, a southern family, which of course I always write about, and one, the story of the WASPs.

TW: Pat, after all the autobiographical breadcrumbs that you dropped in your fiction over the years, now you finally tell the full, unvarnished story of your family. How difficult was that?

Pat Conroy: With my book, I'm dealing with my father, the most Yankeefied man that ever lived, and my mother, the most falsely classical southerner. Everything about my mother that she said was from the old South, the aristocratic South, was completely and utterly false, as I found out when I wrote this book.

But these two people got married in World War II and that's how lives get changed. The pilot from Chicago met the beauty on Peachtree Road and they got married and produced one of the most horrible families that ever lived in America.

FF: Every time I finish one of Pat's books, I want to take all of my books, burn them, change my name and move to another country. He stuns me with his clarity, his honesty about writing about what is so close to him. I was so close to a bad childhood that I blotted it out.

But Pat is absolutely brilliant. I don't know how he does it, remembering details like scenes in a movie. And this new book, I just sobbed. It was stunning.

TW: It's difficult to read at some points because it is so honest and so hard to imagine living through.

PC: Dad drank and then he beat you and he beat mom and he beat everybody else. What dad was good at was making all of us alcoholics later. The memory of that was seared in my memory, and I could not get rid of it.

Now, to answer Fannie, when I read her books, I think, why wasn't I a woman born in Alabama? Hilarious stories happened to me, but my stories don't seem hilarious to me; they seem simply out of King Lear. I just read Fannie's book and I'm roaring laughing. Then she always hits me with a part that breaks my heart.

TW: Fannie, there's such a sweet natured appeal to the characters in your novels. Have you written many really mean or despicable characters?

FF: Oh, yes. In Fried Green Tomatoes there was Frank Bennett. In this one, too, there's a bad guy. But usually I don't. I don't know why.

But I want to talk about these dysfunctional childhoods. I think people are always asking why southern writers do this so well. I'm working on a theory. I think the thing that injures people the most is humiliation. Most people don't know, or choose not to remember, that the south was the only part of the United States that was ever defeated in war. And so we were humiliated. That is a wound that doesn't heal. All the Southerners had was their so-called family name. That's all they had left. Being humiliated injures people, and it makes you want to explain yourself and keep saying but, but, but, but, but.

TW: What do you think of that, Pat?

PC: I agree. There's something about the storytelling mystique that comes out of the South. My mother and grandmother raised me to hate William Tecumseh Sherman. I didn't even know who he was. But he burned Atlanta. I read about Sherman while I was at [the Citadel] and I thought, good soldier. I told my mother this and she said she would never speak to me again if I ever mentioned a word.

Fannie can write that bad South. This gal Lenore in her new book, you know, southern womanhood has rarely been so roasted or put over the grill so well. That woman drove me nuts.

TW: I think we've all known a Lenore. Fannie, do any people from your real life ever make their way into your novels?

FF: Yes. Lenore, the southern matriarch, was based very closely on my grandmother and my mother's relationship. Sookie is a combination of gals I went to school with. I think I write about the South because the characters down there are so bigger than life, that it's easy for me. People go Oh, there can't be people like that. But Pat and I know there really are.

TW: Fannie, you divide your time between California and Alabama, but do you still think of yourself as a southern writer?

FF: Yes, I do. Even when I am writing about another area, I am still writing with a southern point of view. I always write about southerners. I think it's like being in a different country.

TW: Pat, you talk in your book about how you wanted this to be a kind of summing up of all the family drama. Do you feel better now that you've written this book?