Southmarch Castle is about to be caught between two implacable enemies, the ancient, immortal Qar and the insane god-king, the Autarch of Xis. Meanwhile, its two young defenders, Princess Briony and Prince Barrick, are both trapped far away from home and fighting for their lives.

And now, something is awakening underneath Southmarch Castle, something powerful and terrible that the world has not seen for thousands of years. Can Barrick and Briony, along with a tiny handful of allies, ordinary and extraordinary, find a way to save their world and prevent the rise of a terrible new age-an age of unending darkness?

Christopher Paolini's abiding love of fantasy inspired him to write the Inheritance cycle--Eragon, Eldest, and Brisingr--which quickly became an internationally bestselling series. Christopher draws inspiration for the world of Eragon and his dragon, Saphira, from the natural beauty that surrounds his home in Montana: the tumultuous weather, the rushing Yellowstone River, and the soaring Beartooth Mountains.

Read on for Paolini and Tad Williams's discussion about why they write fantasy, their upcoming projects, and more. 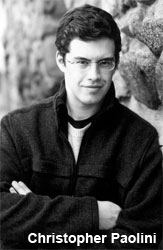 Tad: Hi, Christopher. Nice to talk to you, albeit virtually. It was great hanging out with you and your family this summer. Pretty much all of us fell in love with your part of the world, too.

Be warned: this isn't my best time of the day, so if I start calling you "Herman" and asking what it was about whaling that interested you, please forgive.

The first thing I'd like to ask you as a starter question is: why fantasy? I mean, there's the obvious answer (which is also true for me) that it was something I loved to read growing up, but I guess I'm curious what is it that still resonates for you. Why do these kind of stories, these kinds of characters, these kinds of worlds, still speak to you?
In a similar vein, do you have another kind of fiction, another genre, that you'd really like to try? If so, why? Any genres you think you'll never write but wish you could?

Christopher: Hi Tad. Great talking to you as well. We all had a wonderful time when you guys visited. Definitely one of the highlights of the year.

I'm still waking up as well -- takes a few cups of tea and a few strips of bacon before the little gray cells start firing properly -- so if I sound a bit muddled, that's why. Still, we can make a stab at coherency, eh? 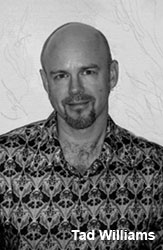 Hmm. Why do I write fantasy? As you said, it's because I enjoy reading it, but I enjoy reading it because . . . well, for a number of reasons, I suppose. First of all, fantasy allows for all sorts of dangerous situations, and those can provide a lot of excitement in a story. And excitement is always fun. Also, epic fantasy usually deals with themes and situations that everyone can relate to, such as the challenge of growing up, or how one is supposed to deal with moral quandaries. Fantasy is the oldest form of literature; the very first stories that humans told while crouched around campfires were stories about gods and monsters and tragic mistakes and heroic feats. Even now, those topics still resonate with us on a primal level, which is one reason I think fantasy will remain popular with readers as long as humans are still human. And I love the sense of awe and wonder one can often find in fantastical literature. . . . Fantasy can allow you to see and hear and experience things that have never existed and never *could* exist. To me, that is the closest we come to real magic in this world.

That said, there are a number of other genres I'd like to try my hand at: mystery, thriller, horror, science-fiction, romance, etc. I love stories of all kinds -- although mythic ones certainly hold the greatest appeal to me -- and I'm very much looking forward to experimenting once I finish the Inheritance cycle. Any genres I think I'll never write but wish I could? . . . Probably long-form epic poetry or a witty comedy of manners. Poetry is fun, but my grasp on it is rather shaky, and a comedy of manners (while I enjoy them) is so different from my usual life, I'm not sure I could pull it off properly.

And now a question for you: You have just finished your third (large) series. What is it about big epic stories that so fascinates you? Why not write small, intimate books about a fishmonger whose greatest love is his toothpick sculpture of the Brooklyn Bridge?