To The End Of June: The Intimate Life Of American Foster Care

Casts a searing eye on the labyrinth that is the American foster care system. NPRs On Point

Who are the children of foster care? What, as a country, do we owe them? Cris Beam, a foster mother herself, spent five years immersed in the world of foster care looking into these questions and tracing firsthand stories. The result is To the End of June, an unforgettable portrait that takes us deep inside the lives of foster children in their search for a stable, loving family.

Beam shows us the intricacies of growing up in the systemthe back-and-forth with agencies, the rootless shuffling between homes, the emotionally charged tug between foster and birth parents, the terrifying push out of foster care and into adulthood. Humanizing and challenging a broken system, To the End of June offers a tribute to resiliency and hope for real change.

A sharp critique of foster-care policies and a searching exploration of the meaning of family. Publishers Weekly, starred review 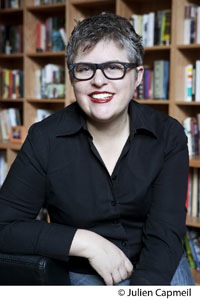 Q. Why did you write this book?

A. Im a foster mother and, through my other books and reporting, Ive spent a lot of time with people impacted by the child welfare system. I was amazed that we could spend more than 20 billion dollars a year in this country on a system that nobodynot the foster kids, not the foster or biological parents, not the social workers, not the administrators or commissionersthinks is working. I wanted to find out why.

Q. You adopted your foster daughter, Christina, when she was kicked out of her group home at age 17. Christina is 30 now. What is she up to these days? What is your relationship with her like?

A. Christina is an adult and shes pretty amazing. She lives in Los Angeles doing HIV outreach and education and goes to college at night. Were very close, we talk on the phone every other day or so. I feel so lucky, really, to have her in my life.

Q. You interviewed dozens of children, birth parents, foster parents, agency workers, and others in your five years of research. They all must have changed you in some way, but were there a few who especially stuck with you?

A. I spent several years tracking a set of parents in Brooklyn, Bruce and Allyson Green, who were particularly loving and dedicated. They did everything right: they took advantage of all the educational and extracurricular resources available to their foster kids, they loved their foster and biological kids equally, and when the time came, they adopted a girl named Fatimah and had done everything but sign the adoption papers with a girl named Dominique. Both of these girls were 17. Adoption is like the Holy Grail in foster care. In this case though, Fatimah and Dominique panicked. For so long, adoption had been held out as a kind of panacea to all of their prior trauma, and when adoption didnt fix their lives, they ran away, and ended up worse than before.

I also followed a single mom in Yonkers named Mary who adopted much older kids, kids who had already aged out of the system and were technically adults. These kids also fell outside the fixed lens of child welfare, but they were helped tremendously by adoption. Sometimes the most creative solutions arent happening within child welfare itself, but just at its edges.

A. New Yorks child welfare system is an enormous, overburdened bureaucracy with a thousand moving parts, all with different allegiances and poor intercommunication. Its this bureaucracy, rather than one bad director or singular mal intent, which is so destructive. Youll see this Kafka-esque quality everywhere. Also, as with our jails and prisons, child welfare is becoming increasingly privatizedin New York and across the countryand this has both useful, and problematic, implications. As far as foster care implementation, New York is somewhere in the middle: there are cities and states with far higher caseloads or longer delays to family reunification, and there are places that do a better job.

Q. About how many children are in foster care in the U.S. this year?

A. The last data we have is from July 2012, and there were 400,540 kids in foster care. The numbers have gone down significantly in the last 15 years, thanks to the 1997 Adoption and Safe Families Act, but the numbers have also changed. Were seeing the youngest kids getting adopted, but more teenagers than ever are aging out of the system with no resources at all.

Q. Are there any numbers on what percentage of kids in foster care are eventually adopted?

A. It's important to remember that the central goal of foster care is to reunite kids with their birth parents, and in any given year about half of the kids will go home. The trouble is really with the trauma they endure during the separation, shuffling their way through multiple strangers' homeson average, for close to two years.

There are biological parents who cant or wont care for their children, though, and last year about 50,000 foster kids were adopted from foster care and 100,000 foster kids were waiting for prospective parents. On average, the adopted kids had been in foster care for three years and then waited another year to be adopted. But these are averages: some kids will wait much longer, or never be adopted at all. And these figures dont even include the tens of thousands of kids 16 and older who have given up hope for adoption entirely, deciding to just wait for emancipation from the system as adults.

Q. Why dont we hear more about these kids?

A. For one, people are afraid to read about child abuse. Its painful and frightening to think about kids being harmed. In reality, though, the vast majority of kids are removed from their families not for abuse but for neglectand many argue that neglect is a code word for poor. We can look at poverty with a more direct gaze, so this may be a way to open the conversation more.

Secondly, theres a kind of fait accompli attitude around foster care and foster kids in general; we dont see it as the dynamic, changeable, and changing system that it really is.

Q. Since 2006, Floridas foster care system has been funded differently from other states. Their system was recognized as a possible model for other states by President Obama in 2011. What makes Florida unusual? Should other states adopt their way?

Traditionally, and in most states, foster care is funded on a per diem basis: agencies get a certain dollar amount from the federal and state government for every day a child stays in a foster or group home. This financial structure provides a kind of perverse incentive to remove kids from their parents. In 2006, Florida accepted a flat fee, called a waiver, for five years. This meant they only had to remove kids from the most dangerous households and then could spend the rest of the money on things like abuse prevention, drug rehabilitation, and keeping the family stable and secure. Thirty states and counties have now applied for similar waivers, promising a sea change in the way we think about, and approach, child welfare overall. I think its quite promising and exciting.