The Mushroom Hunters: On The Trail Of An Underground America

In the tradition of Michael Pollans The Omnivores Dilemma, Susan Orleans The Orchid Thief, and Mark Kurlanskys Coda renowned culinary adventurer goes into the woods with the iconoclasts and outlaws who seek the worlds most coveted ingredient . . . and one of natures last truly wild foods: the uncultivated, uncontrollable mushroom.

Within the dark corners of Americas forests grow culinary treasures. Chefs pay top dollar to showcase these elusive and beguiling ingredients on their menus. Whether dressing up a filet mignon with smoky morels or shaving luxurious white truffles over pasta, the most elegant restaurants across the country now feature an abundance of wild mushrooms.

The mushroom hunters, by contrast, are a rough lot. They live in the wilderness and move with the seasons. Motivated by Gold Rush desires, they haul improbable quantities of fungi from the woods for cash. Langdon Cook embeds himself in this shadowy subculture, reporting from both rural fringes and big-city eateries with the flair of a novelist, uncovering along the way what might be the last gasp of frontier-style capitalism.

Meet Doug, an ex-logger and crabbernow an itinerant mushroom picker trying to pay his bills and stay out of trouble; and Jeremy, a former cook turned wild food entrepreneur, crisscrossing the continent to build a business amid cutthroat competition; their friend Matt, an up-and-coming chef whose kitchen alchemy is turning heads; and the woman who inspires them all.

Rich with the science and lore of edible fungifrom seductive chanterelles to exotic porciniThe Mushroom Hunters is equal parts gonzo travelogue and culinary history lesson, a rollicking, character-driven tour through a world that is by turns secretive, dangerous, and tragically American.

Praise for The Mushroom Hunters

The Mushroom Hunters lends fresh, sharp illumination to a little-known but vigorously contested patch of gastronomic turf. . . . [Its an] entertaining ramble through the woods with a group of ragtag characters.The Washington Post

Like Susan Orlean in The Orchid Thief, Seattle author [Langdon] Cook shines a light on a shady subculture operating at the seam between wilderness and commerce. Like author Michael Pollan, he knows that every bite of food these days has a complex, often unsavory backstory. Like the late Hunter Thompson, he not only goes along for the ride with the shifty characters hes writing about, but drives the getaway car. After reading The Mushroom Hunters, youll never look at a portobello the same way. . . . [A] beguiling, surprising book.The Seattle Times

Not simply about mushrooms, this book examines human behavior, economics, food, society, and nature. In the end, readers will have learned a great deal about U.S. economic and social structuresall while being entertained and enlightened by stories of gastronomy and mushrooms. Highly recommended.Library Journal

Uncultivated mushrooms are one of our last truly wild foods; it often takes truly wild and rough mushroom hunters to bring them to our table. Cook travels and hunts with them in a riveting, crazy undertaking, told in often-poetic prose.Shelf Awareness

An Amazon Best Book of the Month, September 2013: In your neighborhood grocery store sits a bin of nondescript white mushrooms, unthreatening and clearly-of-this-planet fungi that might have been plucked from the pages of Beatrix Potter tale. But for accomplished forager and outdoorsman Langdon Cook (Fat of the Land), the story goes much deeper. He took a long walk in the woods and returned with The Mushroom Hunters, a collection of delightful stories of a mycelial underground filled with eccentrics and obsessives who at first seem strange (and maybe even unsettling), but grow more charming by the page. This book is a ton of fun--equal parts adventure, natural history, and gastronomy. Naturalists (who arent necessarily foodies) will learn about some of the more exotic fungi and their uses on the table, while foodies (who might not be naturalists) will find the loamy details of the mushroom trail enlightening. Above all, The Mushroom Hunters will make you hungry. --Jon Foro

Author Langdon Cook on The Mushroom Hunters: On the Trail of an Underground America 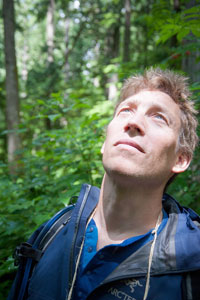 The idea for The Mushroom Hunters came to me while harvesting morel mushrooms in July, 2007, during an episode thats briefly recounted in my first book, Fat of the Land. I was in the North Cascades of Washington State near the Canadian border, in one of the last truly wild regions of the Lower 48, home to wolves and grizzlies. A friend and I heard strange voices in the woods. Moments later we came face-to-face with two men, both wearing impossibly large packs filled with morels, maybe eighty pounds apiece. Unlike us, these men were picking mushrooms to sell, spending months in the bush working in abject conditions that would test the meddle of anyone. I had heard that commercial mushroom pickers often packed guns into the woods and guarded patches with territorial vigor. They stared at us and we stared at them. Nothing was said. Then, just like that, they turned on their heels and disappeared back into the timber. It was like a Bigfoot sighting.

After that I was determined to infiltrate the commercial wild mushroom trade, a scrappy, mostly hidden and itinerant enterprise that follows the mushroom flushes year-round, with echoes of Wild West frontier-style capitalism and Gold Rush days gone by. I was amazed that no one had ever written a book-length account of it, and was fortunate to meet a number of pickers and buyers who allowed me into their world. Over the next few years I traveled from my home in Seattle as far north as Yukon Territory and, come winter, camped with pickers on the Lost Coast of California. I went to Oregon and British Columbia, to Michigan, Montana, Colorado, and New York City, among other places, to follow the invisible food chain from patch to plate. I got on the mushroom trail and embedded myself in a subculture that is, for better or worse, indelibly American.

The Mushroom Hunters weaves together food, natural history, and outdoor adventure. Its the result of thousands of hours spent with pickers, buyers, and chefs; hundreds of hours of taped interviews; and my own compulsion to work this first-hand material into a narrative that readers can appreciate, whether or not theyve ever tasted a wild mushroom or even taken a walk in the woods. 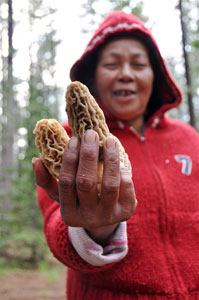 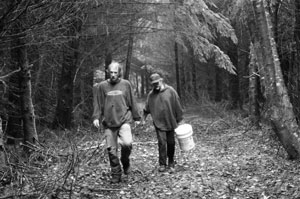 Doug and Jeff scouting chanterelles on the Olympic Peninsula, Washington. 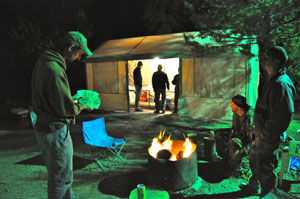